Everything You Need to Know About Deepfake Technology 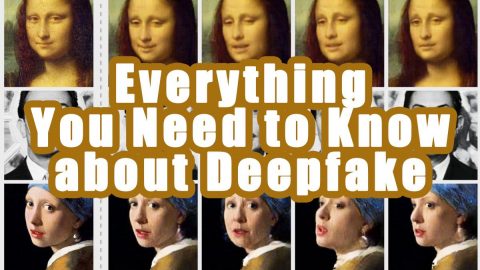 Deepfake, a specific type of hoax creation under artificial intelligence, is used to create images or videos by swapping or replacing one person’s appearance or likeness with that of another. Most of the time, such creations are highly indistinguishable from the truth.

In today’s world, deepfake technology is commonly used and has been making headlines.

How Does Deepfake Create Work?

Deep learning, a portmanteau of machine learning and artificial intelligence, involves problem-solving with sets of data and algorithms to create images or videos that are realistically deceiving.

An autoencoder is the basis of deepfake technology. An autoencoder is a deep neural network that understands how to take an input, compress it into a manageable representation or encoding, and then regenerate the original input from this encoding.

The network is forced to construct these pictures rather than just returning what it sees when there is congestion in the middle. The encodings aid in capturing more extensive patterns.

To put it simply, the AI system studies the facial features of a person in the original photo and then superimposes them to the face of another one through algorithms.

Deepfake technology is not limited to videos. In fact, the technology can easily be implemented in audio. Realistic deepfake audios can now be created using algorithms, and voice cloning occur within a few minutes or hours. The gaming sector has gained huge benefits through this technology.

The Development of Deepfake Technology

In 2014 Ian Goodfellow, a Ph.D. student at the University of Montreal pioneered imaging with the generative adversarial neural network (GAN) approach. Goodfellow trained two neural networks on the same image database and created new ones. He pitted the two networks against each other to identify which images were original and which were fictional, like a digital game of cat and mouse.

In 2017, researchers from the University of Washington used more than 14 hours of recording of President Barack Obama, to reproduce his image and voice. They created a model of the shape and movements of the mouth to link it to the voice recordings. With this technique, starting from real videos, they could put any message into Barack Obama’s mouth.

In 2018, a group of professionals made a deep fake, not very good, but fun, of Texas Senator Ted Cruz singing and imitating Tina Turner. In this case, the algorithmic model coded how the senator’s face and that of an actor gesture, move, and look. Next, it decoded the images of Ted Cruz’s face and reconstructed them on top of those of the actor’s face.

Nowadays, with the rapid development of deepfake technology, its application is no longer limited to videos and pictures, and even real-time face swapping is available in live streams.

You may have seen the famous deepfake video “Robert Downey Jr and Tom Holland in Back to the future”, where they play the role of Doc and Marty. This video has received over 1100w views on YouTube.

Talking about Tom cruise, we have to mention the TikTok blogger @Deeptomcruise who has attracted a lot of attention in the past two years.

The account posted three high-quality videos in which a man looks like the Hollywood actor Tom Cruise by using deepfake technology.

Last year, the announcement of Cruzcampo with the deep fake of Lola Flores was all the rage. More than 5,000 images of the Pharaoh have been used to link her face and her voice with the voice of an artist who represents her.

In addition to actors, politicians and business celebrities have also become the subject of deepfakes. Examples are as follows: the well-known Barack Obama announcement video, Donald Trump’s Money Laundering video, and the video that appeared in which Facebook CEO Mark Zuckerberg boasted of how the platform “owns” its users.

Technology is harmless in itself, and good use of it can have a great positive impact on people, companies, and society. The legitimate use of the image and voice of third parties opens up excellent business opportunities in the field of television, cinema, marketing, etc.

Initially, deepfake videos were created only for public entertainment. Like the previous examples of celebrity deepfakes, deepfake can be used to attract interest and attention on social media, which is an innovative tech for content creators.

Deepfake technology can be used to improve the dubbing of foreign-language movies, and it can also enliven galleries and museums.

The Salvador Dalí Museum in Saint Petersburg, United States, has recreated Dalí’s image and voice interacting with visitors and even taking a selfie with them. The creation has required more than 6,000 frames and 1,000 hours of machine learning. It was something people could not even think about in the past.

For celebrities, deepfake makes it easy for them to expand their reach. The “stars” only need to agree to the copyright issue, brands will create their own images of stars with deepfake without the need for the stars to appear for recording or modeling.

MBN warned viewers in advance that the newsreader would be a deep fake, and they planned to continue using the tech for some breaking news reports. This will probably have a huge impact on the traditional media industry.

In times of social distancing, the time when people limit their outdoor experiences and turn to the online environment, marketers have used deepfake to create experiences that are close to reality. Deepfake technology has helped businesses bring experiences such as interactive virtual fashion weeks, online games, or Fashion Innovation Agency, directly to consumers through the network environment.

In the education area, deepfake can be used to create images and voices for some historical figures based on pictures and audio left in order to illustrate things more vividly.

Deepfake voice imitation can help restore people’s voices when they lost their voices due to illness. Voice cloning can also help education by reproducing the sounds of historical figures, such as CereProc creating a video of former US President John F. Kennedy, talking about COVID-19.

Deepfake videos are also used in politically motivated campaigns. Many fake videos may be released with the aim of leading public opinion and causing confusion.

In 2018, former President Donald Trump faked a video when he had never made such a statement. It distorted the public’s view of many politicians and executives. Observers are also concerned about the possibility of political manipulation by fake news created by deepfake.

In early 2019, someone impersonated the voice of the CEO of a UK energy company, asking the CEO to make a transfer of $243,000 to an alleged Hungarian supplier. By the time the scam was discovered, the money was already scattered around the world and had moved through accounts in Hungary and Mexico.

With the malicious misuse of deepfake technology by individuals, financial fraud is no longer an isolated case. How to prevent deepfake from being misused has clearly become a new issue.

In the technology market, there are many applications and software specialized in creating very famous deepfake videos, such as DeepSwap.ai, DeepFace Lab, FaceApp, etc. If anyone is knowledgeable about the GitHub programming community, anyone can find a lot of deepfake tools there.

How to Make a Deepfake?

Deepfakes, swapping a face in a photo, video, or GIF is quite common today. This form of Al entails several methods of implementation. Using an Al encoder that reconstructs an image from every angle or a General Adversarial Network (GAN) adding a stream of authentic images by improving flaws through Al swap websites such as DeepSwap.ai, face-swapping couldn’t get easier.

Opting for DeepSwap.ai for creating deepfakes is like choosing a shortcut that’s less time-consuming and far more efficient. DeepSwap’s site allows you to create professional-quality deepfakes that yield astonishing results from absolutely any device you have. The built-in deep learning algorithm takes care of the procedure once you upload the two pictures you want to swap. DeepSwap couldn’t offer better and simpler ways to create all those deepfakes, so prioritize convenience and create as many face swaps as you want with Deepswap’s professional and easy-to-use website.

To make a perfect deepfake:

Step 1: Upload a video/GIF or quality photo you want to swap.

Step 2: Add a Face to your project, and ensure you’re using a face of similar skin color.

Step 3: Press the Create bottom, and allow the system to process the file. The system generates a perfect file within a few seconds, and you can download your project.

Step 4: Save the deepfake or Upload the next file.

Here is a detailed DeepSwap step-by-step guide for your reference.

How to Detect Deepfake Creations?

As deepfakes become more professional and sophisticated, it is essential to learn how to detect them. Deepfake detection technology should be promoted to prevent the spreading of potentially harmful deepfakes.

Some indicators that help detect a deepfake are:

· The majority of deepfakes do not appear realistically. Animation errors such as blinking too often or not blinking at all may indicate a deepfake.

· If a face seems to be blurred or unnaturally softened, the video is deepfaked. Skin and hair issues are clear indicators of spotting a deepfake.

· Deepfake algorithms capture lighting from the original video placing the same lighting in the target video. If the lighting looks out for the surrounding environment of the video, you have probably encountered a deepfake.

· The audio of the video might not suitably match the speaker.

How Could People Deal With the Potential Risks of Deepfake?

Deepfake is a double-edged sword. People should look at it rationally rather than magnify its shortcomings. People should use the deepfake tool properly, for example, for entertainment and education purposes. People should also learn to make good use of deepfake detection tools when they realize something is wrong.

Similarly, certain legal regulations are necessary. The State of Virginia (USA) has amended its law banning non-consensual pornography, including deepfake videos. The state of Texas criminalizes the use of deepfakes to interfere in elections. Meanwhile, California banned the release of a political candidate’s video or audio file 60 days before an election, except for satire and news releases.

The Future of Deepfake Technology

Without a doubt, the artificial intelligence technology behind deepfakes and machine learning have a future that is already very promising. As deep learning techniques and neural networks advance, the range of possibilities will grow rapidly in different fields such as entertainment, health, education, and business.

However, as access to this technology advances and increases, so does the risk of using deep fakes for malicious purposes. Artificial intelligence itself can be used to detect deep fakes. Some companies like Google have launched a database with thousands of manipulated videos to develop tools. It would probably be good news if these tools could be put into regular use soon.