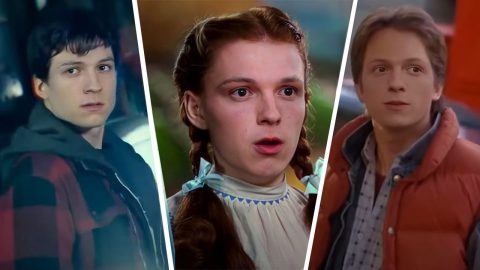 Tom Holland has garnered a huge fanbase and critical acclaim for his wide-eyed, quipping performance as the iconic superhero Peter Parker in the MCU’s Spider-Man franchise. We can see him in more and more movies. In the meantime, Tom Holland’s deepfake videos are seen almost everywhere on the internet.

Here are the 4 most popular Tom Holland deepfake videos:

As we all know, both Tom Holland and Tobey Maguire have played the role of Spider-Man. In 2002, Tobey Maguire starred in Spider-Man, based on the popular Marvel Comics superhero. The film was a major success and made him a star. In this deepfake video, we can see Tom Holland replacing Tobey Maguire in Sam Raimi’s Spider-Man movie.

The deepfake video features Tom Holland as Evan Baxter, who is controlled by Jim Carrey and makes a fool of himself on live news. It makes me can’t stop laughing when I first see this video.

3. Tom Holland as Marty Mcfly in Back to the future

Tom Holland has publicly stated that he has his eye on a famous movie role： Marty McFly, the teenage time traveler played by Michael J. Fox in the beloved sci-fi comedy Back to the Future and its sequels. According to Holland, there have even been talks with Hollywood about the possibility of rebooting or reviving the series with him in a lead role. The period after that, the deepfake video went viral in which his face is superimposed over Fox’s in a scene from the 1985 movie.

4. Tom Holland as Dorothy in The Wizard of oz

It’s clear that people love seeing Tom Holland and Downey Jr. together. A new Wizard of Oz deepfake video features Tom Holland as Dorothy and Robert Downey Jr. as Scarecrow, giving us an incredibly convincing glimpse at what it would be like if the MCU rebooted The Wizard of oz. Given the two actors’ history as Iron Man and Spider-Man and the pseudo-father-son dynamic that happened in the Marvel movies, this seems like it would be a great fit for Downey Jr. and Tom Holland.

How to Create Deepfake Videos