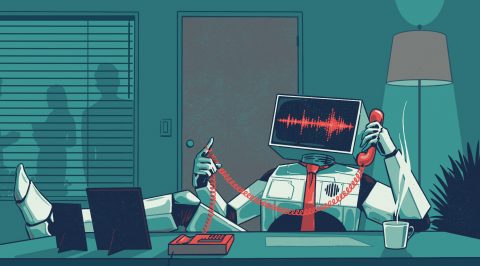 In the field of synthetic media, deepfake voices are one of the phenomena that have emerged in the last five years that stands out the most as being particularly distinctive. Many people have worked out how to put this technology to good use.

What Is Deepfake Voice?

A deepfake is a video, audio, or picture imitation that seems authentic but is the product of artificial intelligence technological manipulation. A generative adversarial algorithm is responsible for the creation of deepfakes. It seems like it is fighting against itself to learn, similar to how humans learn from their own errors. The system will “reprimand” the algorithm if it makes a mistake and “encourage” it whenever it acts correctly up to the point when it generates the most convincing fake.

Deepfakes are becoming less difficult to produce because of ongoing developments in AI technology. To create a deepfake voice, recording your own voice for some time while eliminating reservations and other forms of interference is sufficient. The recording you generate should then be sent to a company offering this kind of service for processing.

A few years ago, the most convincing audio deepfakes were produced by capturing a person’s voice, dissecting their speech into component sounds, and then piecing those sounds back together to construct new words. Now, neural networks can be educated on sets of speech data of any grade and volume. Owing to the competition forces them to detect a real person’s speech more quickly and correctly. Realistic voices can now be produced from as little as a few minutes worth of audio information when before, systems needed as much as tens or even hundreds of hours’ worth of sound.

Even though synthetic voice and deepfake voice are both based on the same foundation. They are used for quite different things and have very distinct implications. Artificial intelligence is used to create a clone of a person’s voice for creating synthetic or deepfake voices. The technology can produce a very lifelike imitation of a human voice in terms of tone and resemblance. Deepfake voices are often connected with imitating human voices to fool another person. On the other hand, synthetic voices are utilized in commerce, entertainment, and other fields to progress them.

The leaders of the AI sector and the most rapidly expanding AI businesses would rather connect themselves with synthetic media than deepfake. Both as a term and as the aim of its creation. These technological breakthroughs have paved the way for the increased use of synthetic media in various fields, including the entertainment and film industries, marketing, healthcare, and customer support. The following is a list of the technology’s most common uses:

When duplicating an actor’s voice in post-production, synthetic voices are employed. So that voice of an actor who has died away in the intervening years can be brought back to life.

Using speech synthesis software, you can give your animations the ability to talk in whatever manner you see fit.

It is common practice to utilize voice synthesis when developing characters for usage in video games to ensure that these characters have voices that are indistinguishable from those of the original characters on whom they are based.

Because of technological advancements, the dubbing process could now be streamlined and speeded up significantly.

It’s possible that a performer died away or departed the production before it could be completed. You could wish to revitalize an existing voice or include a historical voice in a project. All of this is realizable with the help of computer-generated voices.

However, in addition to their employment in the entertainment industry, synthetic voices have various applications. The field of medicine is certainly one of the more prominent ones.

Patients who suffer from voice and speech impairments often experience a significant decline in their quality of life due to the challenges they face while attempting to communicate with others. Voice cloning and conversion technologies provide a novel and exciting potential solution. Employing artificial intelligence, the technology would take whatever speech patients can generate and change it into something that sounds more natural and is even simpler to comprehend.